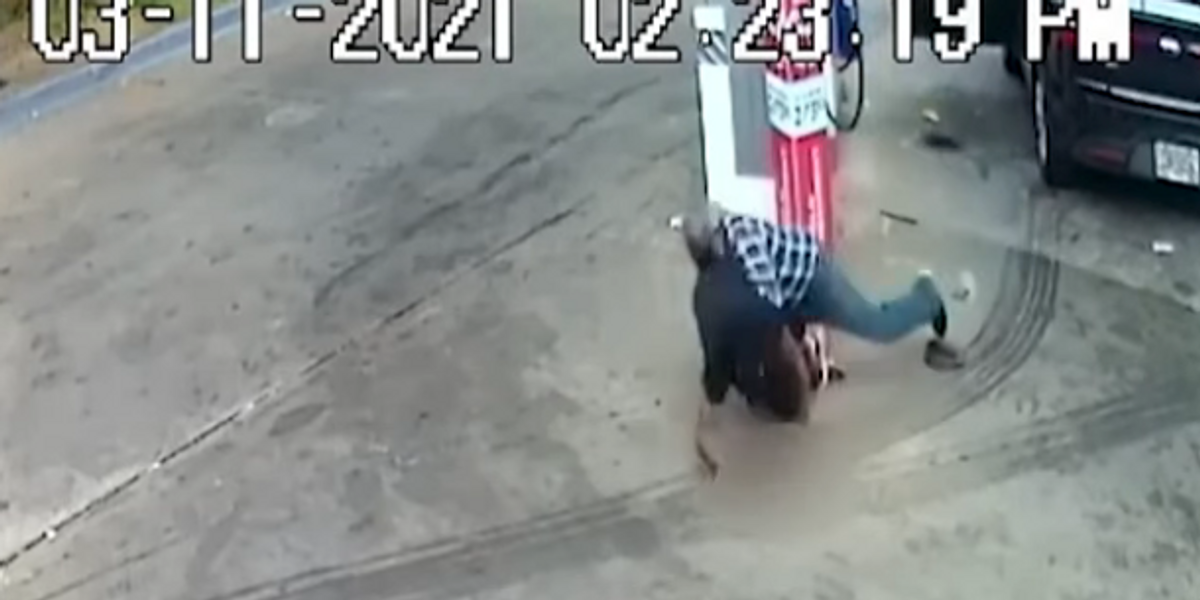 “I’m just glad to be alive,” the elderly victim, who has chosen not to be identified, told WAGA-TV in an interview about the incident.

He described to the local news outlet how he was just pumping gas at 2:30 in the afternoon in southeast Atlanta last month when he was approached by the suspect.

“I thought he was going to shoot me,” the victim said. “As I put my gas nozzle back and was getting ready to get in the car, I turned around and he was there with a gun in his pants, and showed part of it. He just said ‘Give it up’ and I asked ‘To give what up?’ and he said ‘You know what I’m talking about. Give me them keys.'”

Video of the incident released by the Atlanta Police Department then shows the victim hurriedly grabbing medical records from the front seat of the car when he saw an opportunity to fight back against the assailant.

“I saw he wasn’t looking and I grabbed his arm with the gun in it and we started ‘tussling’ and we hit the ground,” the victim recalled. Footage shows the assailant’s gun was tossed in another direction during the scuffle.

After getting up off the ground, the suspect allegedly grabbed the gun again, pointing it at the victim, saying, “Do you want me to shoot you? Don’t make me shoot you, man.”

The elderly male then ran into the convenience store seeking help, while the suspect attempted to steal the car. But after the suspect was reportedly unable to get the vehicle to start, he fled the scene.

“Oh, it scared me! It scared me. I thought he was going to shoot me,” the victim recalled, adding that criminals are now starting to pick on who they assume to be vulnerable people.

“They are getting desperate. That’s [why] they are changing to the most vulnerable people now,” he said. Only in this instance, the suspect definitely misjudged the vulnerability of his target.

By releasing the video, Atlanta police hope the public will assist them in identifying the suspect, who they reportedly described in a police report as male teenager with dreadlocks.

Anyone with information is encouraged to call Crime Stoppers’ Atlanta tip line at 404-577-TIPS (8477). The full video of the incident made available by the Atlanta Police Department can be seen below.