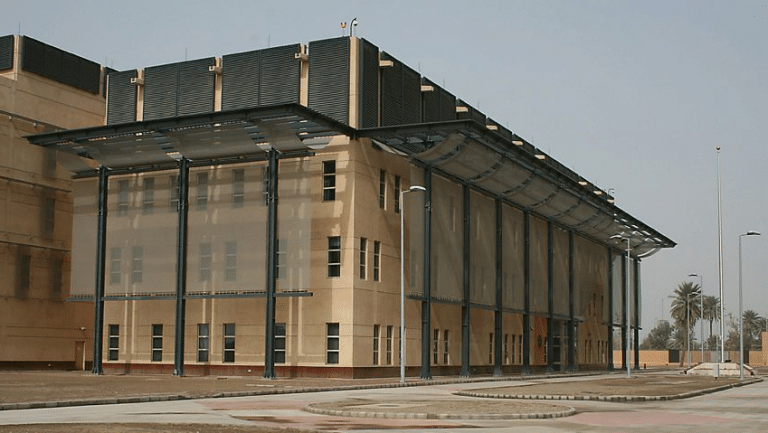 This article was originally published by Radio Free Europe/Radio Liberty and is reprinted with permission.

A State Department spokesman has said the United States will hold Iran “responsible” for a rocket barrage on February 22 that targeted the U.S. Embassy in the Iraqi capital.

But it said it won’t “lash out” in response.

Iraq’s army said earlier that there were no casualties when the embassy, within Baghdad’s heavily fortified Green Zone, was targeted by the rockets.

It said there was only minor property damage, including a damaged vehicle.

Iraqi security officials said three rockets were fired at the U.S. Embassy. They said one rocket fell within the perimeter of the vast embassy complex and another fell in the nearby residential neighborhood of Harthiya just outside of the Green Zone.

Iraqi officials said the rockets had been launched from the Al-Salam neighborhood to the southwest of the Green Zone.

There was no immediate claim of responsibility for the attack.

The rocket barrage was the third attack to target the U.S. presence in Iraq in a week.

A contractor working for the U.S.-led coalition in Iraq was killed and several other civilians were wounded by a rocket attack outside Irbil International Airport in northern Iraq on February 16.

A little-known Shi’ite militant group that calls itself the Guardians of Blood Brigade claimed responsibility for that attack.

On October 20, rockets wounded employees of a U.S. defense company at Balad Air Base in Salahaddin Province about 70 kilometers north of Baghdad.

The U.S. Embassy had been a frequent target of rocket attacks during the administration of U.S. President Donald Trump. The pace of attacks slowed during the weeks before President Joe Biden took office. But attacks recently have become more frequent.

Veteran died before he could raise flag to honor Iwo Jima heroes. University of Kentucky students did it for him.