Now that the EMA has acknowledged a “possible link” between the AstraZeneca vaccine and the deadly cerebral blood clots that have contributed to more than a dozen deaths across Europe, it appears the floodgates have opened, and both the UK and EU members Italy and Spain are moving to restrict the vaccine.

Spain and Italy decided late Wednesday to follow in the footstep’s of France and Germany by limiting the use of the Oxford-AstraZeneca vaccine to people aged 60 and older. France decided to restrict use of the shot for over-55s earlier this month, while Germany restricted use for over-60s. 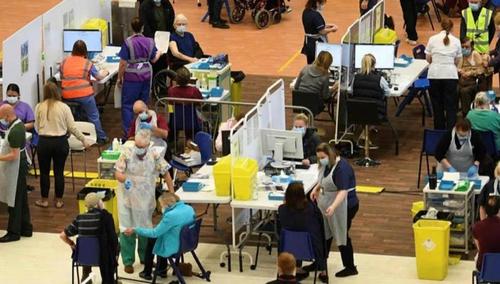 But the UK and Australia are moving in the other direction in terms of age. What’s more concerning – at least, for investors in the troubled pharma giant – the UK, where the jab was designed, developed and tested, has abruptly changed course and decided to limit the jab to use for patients between the ages of 18 and 29. Sweden and Finland allow its use only in the over-65s, while Denmark and Norway have suspended its use until at least next week.

Australia has also decided to limit use of the AstraZeneca vaccine for patients under 50, news it announced Thursday evening local time, making it the most recent government to impose new restrictions on the jab. Initially, Australia had defended the jab, even as one of its top health authorities was one of the first to note that a link between the jab and the dangerous blood clots was likely, even as AstraZeneca, the British government and the EMA continued to insist that there was no evidence to support a link.

But the thinking on that has changed dramatically in the past few days, and yesterday’s EMA press conference marked a notable turning point.

avoid further use of the Oxford/AstraZeneca coronavirus vaccine for under-50s, becoming the latest country to change direction after regulators found a link between the jab and blood clots.

Notably, Canberra is going further in curbing the use of the AZ jab than the UK, where authorities have asked that only patients under the age of 30 receive an alternative vaccine.

London is preparing to offer alternatives to the AstraZeneca shot to patients under 30 after officials said the “suspected” side effect actually puts younger patients at risk – even as Germany and France put the age limit much higher. 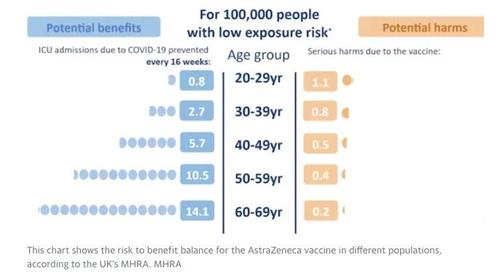 David Spiegelhalter, chair of the Winton Center for Risk at the University of Cambridge, said that about one in 90,000 people under the age of 30 is likely to suffer from the brain blood clots after taking the vaccine (the FT reports that the side effects afflict 4 in 1 million patients). For people in their 60s who have received the jab, the risk of developing blood clots is about one in 500,000, he said.

Despite all of this, UK Health Secretary Matt Hancock has striven to shore up public trust in the vaccine, telling Sky News on Thursday that the public should have confidence in the UK’s “high class safety system run by our world-class regulator.” He added that all three vaccines approved in the UK are “safe and safe at all ages.”

The problems with the AstraZeneca jab have created major problems for Europe and for the WHO, which was relying on the AZ jab to make up the bulk of its “Covax” program, which seeks to provide vaccine supplies to the developing world.

The fallout from the AstraZeneca controversy is reverberating beyond Europe. Nikkei reports that Indonesia is asking China and the US to provide enough COVID doses to its health ministers as AstraZeneca’s production delays (which have been drowned out by all the other AstraZeneca-related newsflow of the past few weeks) create problems for Southeast Asia’s largest country. The Indonesian government has “opened discussions with the Chinese government to ask for an additional 90 to 100 million doses of Sinovac [vaccines],” said Budi Gunadi Sadikin, Indonesia’s health minister, during a parliamentary hearing on Thursday. The minister added that the government is also planning to ask the US for additional vaccines once Washington has finished vaccinating its own citizens.