Female Athlete Shreds Biden Administration To Withdraw Lawsuit: We Deserve To Be The Best, Biological Males Are Taking It Away

Golfer Tiger Woods has reportedly been injured in a car accident in California’s Ranchos Palos Verdes at Hawthorne Blvd near Blackhorse Rd, according to multiple media reports.

Fire crews were reportedly called to the scene as authorities reportedly needed to use the jaws of life to help rescue Woods from the car. Reports claim it was a single-car accident, according tovv. Woods was apparently in town for a photo shoot for the magazine, according to Golf Digest.

“He is currently in surgery,” Steinberg told Golf Digest, “and we thank you for your privacy and support.”

Woods, 45, was in California for a two-day content shoot with Golf Digest/GOLFTV after serving as host for the PGA Tour’s Genesis Invitational over the weekend. Pictures surfaced on social media of Woods smiling with Dwayne Wade and David Spade at Rolling Hills Country Club on Monday, but with his movement still restricted, he did not hit balls or play any holes. The shoot involved Woods giving on-course lessons to a number of celebrities, but he mostly provided instruction and hit a few putts. He was in good spirits on Monday but did not arrive to the course for the second day of shooting.

The accident reportedly occurred in Palos Verdes, a tony section of LA County that’s home to several golf courses, including Palos Verdes Golf Club, which is known for its ocean views. Woods had been recovering from back surgery at the time of the accident.

Just this past week, Woods took photos with stars like David Spade and Dwyane Wade, and announced his recent back surgery could keep him out of the upcoming Masters tournament in Augusta, Georgia. 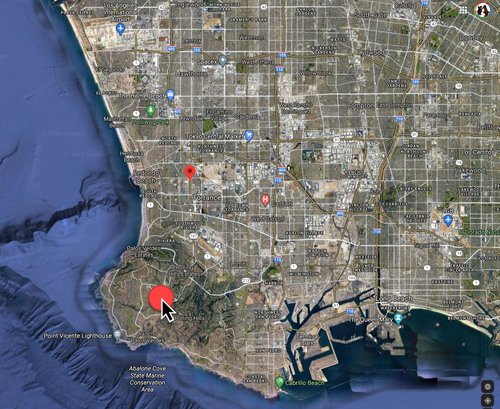 This morning @LMTLASD responded to a roll-over collision in which @TigerWoods was injured. Please see our statement… pic.twitter.com/cSWOxKZC1w

Here’s the text from the statement:

“On February 23, 2021, at approximately 7:12 AM, LASD responded to a single vehicle roll-over traffic collision on the border of Rolling Hills Estates and Rancho Palos Verdes. The vehicle was traveling northbound on Hawthorne Boulevard, at Blackhorse Road, when it crashed. The vehicle sustained major damage. The driver and sole occupant was identified as PGA golfer, Eldrick “Tiger” Woods. Mr. Woods was extricated from the wreck with the “jaws of life” by Los Angeles County firefighters and paramedics, then transported to a local hospital by ambulance for his injuries.”

“Tiger Woods was in a single-car accident this morning in California where he suffered multiple leg injuries. He is currently in surgery and we thank you for your privacy and support.”https://t.co/z7kdbXOmLZ

Remember, Woods had a previous infamous accident back in Nov. 2009 at around 0230ET outside his former mansion in Windermere, Fla., he collided with a row of hedges and hit a fire hydrant. The vehicle finally came to rest after hitting a tree.

That accident and its murky circumstances (paramedics found Woods lying in the road, snoring and without shoes or socks) coincided with the start of a career decline for Woods, which he only recently overcame when he won the Masters back in 2019. A full-on sex scandal followed that first accident, exposing years of infidelity and destabilizing Woods’ life.