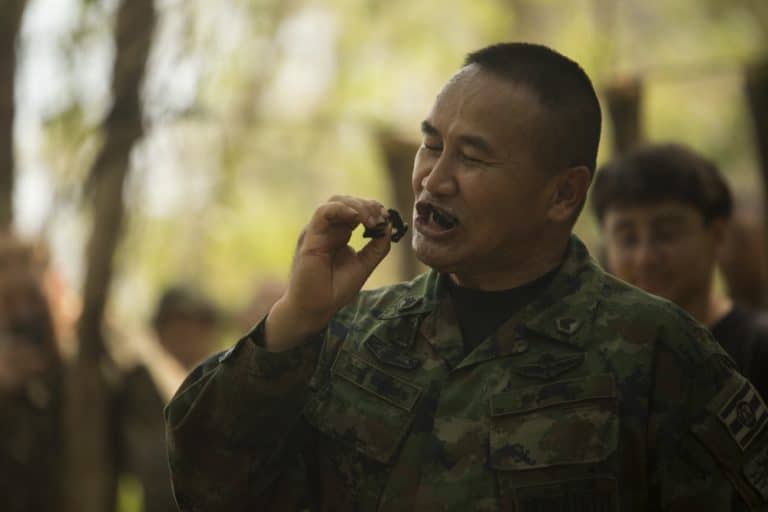 The organization People for the Ethical Treatment of Animals (PETA) called on supporters to protest outside the Pentagon on Thursday and hold large photos of U.S. Marines drinking snakes’ blood during survival training in an effort to pressure U.S. Defense Secretary Lloyd Austin to discontinue the practice.

In March 2020, PETA sent a letter to Marine Corps Commandant Gen. David H. Berger, calling on him to end the Cobra Gold training. In August 2020, PETA followed up on their calls to end the training, this time issuing a letter to then-Defense Secretary Mark Esper.

In February, PETA followed up once again, this time with President Joe Biden’s defense secretary. In their February letter, PETA called on Austin to “to stop the frat-like party masquerading as training in Thailand known as Cobra Gold” and said, “if Girl Scouts Could Survive in the Jungle Without Drinking Snakes’ Blood, Eating Live Lizards, What’s Wrong With U.S. Marines?”

In its Wednesday email, PETA said, “Cobra Gold is purportedly about survival training, but officials have admitted that the actual intention is to build camaraderie among troops—which can be done in other ways. Department of Defense policy requires that non-animal training methods be used whenever possible, and there are numerous food-procurement training options—from books and videos to virtual reality and computer simulations—that don’t harm animals and that have been adopted by various U.S. military facilities after they heard from PETA.”

The effort to discontinue the portions of Cobra Gold that feature consumption of live animals is not PETA’s only effort to affect change within the Department of Defense. In April 2020, PETA demanded the United States Air Force Academy retire a new live falcon mascot and “pledge not to use live-animal mascots in the future.”

The Marines are back in town at Fort Bragg, artillery unit training to cause ‘Bragg booms’