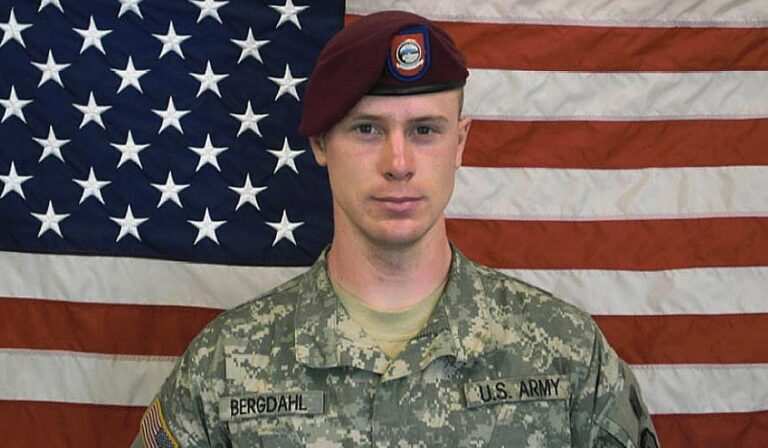 Former Army Sgt. Bowe Bergdahl filed a lawsuit last week alleging President Donald Trump and the late Sen. John McCain (R-AZ) caused “undue command influence” in his 2017 court-martial case in which he pleaded guilty on charges of desertion and misbehavior before the enemy.

Bergdahl’s lawsuit, filed in the Washington D.C. federal court, accuses Trump and McCain of unduly influencing his case and further alleges the judge presiding over his original case had a duty to disclose that he was seeking a “lucrative job” with the Trump-era Department of Justice. Bergdahl’s lawsuit seeks to overturn his 2017 conviction, for which he was reduced to the rank of private and dishonorably discharged.

Bergdahl fell captive to the Taliban in June 2009 after leaving his unit’s outpost in eastern Afghanistan, near the Pakistan border. Bergdahl was held by the Taliban for nearly five years before he was released in May 2014 during a prisoner exchange in which five Taliban detainees at the military prison at Guantanamo Bay, Cuba were traded for Bergdahl.

The lawsuit notes McCain criticized the prisoner exchange in 2014, saying, “I would not have made this deal . . . .I would not have put the lives of American servicemen at risk in the future.” The lawsuit also says Trump “repeatedly vilified” Bergdahl before the 2016 presidential campaign and described him as a traitor at several campaign rallies “suggesting, among other things, that he should be executed.”

The lawsuit further alleges that Trump criticized Bergdahl’s sentence in the court-martial case immediately after his sentencing but before a convening court authority with discretion to overturn the conviction could review the case.

Bergdahl argued to have his case dismissed over undue command influence (UCI) in January 2017 after Trump took the oath of office as president.

The lawsuit argues that Judge Jeffery R. Nance, an Army colonel and military judge, should have disclosed his interest in joining the Department of Justice as an immigration judge. Nance’s application for the DOJ position cited his role in Bergdahl’s court-martial case and said the case “has received significant national and international media attention and involves many complex issues.” Nance even reportedly used a February 2017 decision denying Bergdahl’s UCI motion as a writing sample in his DOJ application. The lawsuit states it is unclear whether Nance accepted Bergdahl’s plea in the case before or after he submitted his DOJ application.

Bergdahl was sentenced in November 2017 to a demotion and dishonorable discharge. He was also ordered to pay $10,000 in pay and allowances

This lawsuit is not Bergdahl’s first attempt at overturning his 2017 conviction. In 2019, Bergdahl lost an appeal to Army Court of Criminal Appeals on the same UCI arguments.

The court said, “Although there was some evidence of unlawful command influence adduced at trial and in the post-trial process, the government met its burden to demonstrate that an objective disinterested observer would not harbor a significant doubt as to the fairness of the proceedings.”

Judge Kevin Ohlson said “it was the strength of the Government’s evidence” not Trump or McCain’s comments that caused Bergdahl to plead guilty.

According to Military.com, Ohlson noted Bergdahl himself had pleaded guilty and requested dishonorable discharge and that he had a chance during his trial to withdraw his guilty plea after his attorney’s raised concerns about undue command influence, but Bergdahl declined.

According to Army Times, Bergdahl again appealed his case before the U.S. Court of Appeals for the Armed Forces in September 2020, challenging Judge Nance’s impartiality, but his appeal was denied the following month.

Bergdahl’s latest effort is now focused in the U.S. District Court for Washington D.C. The lawsuit acknowledges he pleaded guilty to the court-martial charges, but says he did so “without waiving his UCI claims and without a pretrial agreement.”

Chinese professor mocks US over Texas power failure, calls it ‘failure of capitalism’