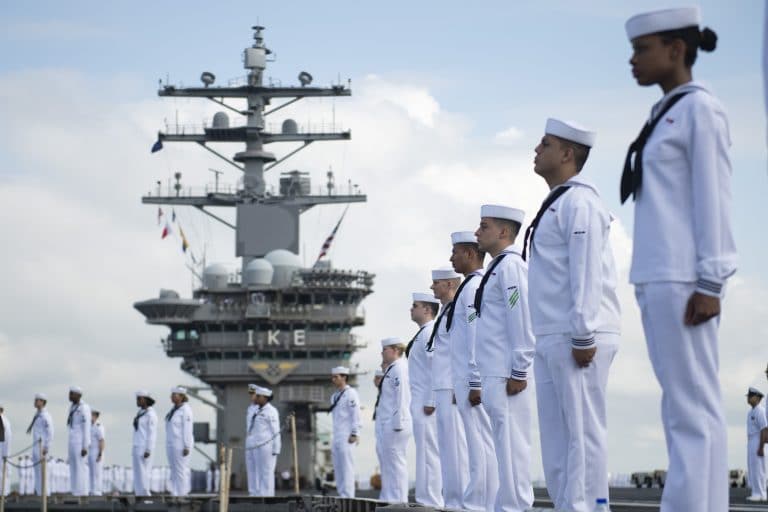 Over the weekend, the U.S. Navy ordered all of its personnel to retake their oaths of service as part of an ongoing extremism stand-down period.

Chief of Naval Personnel Vice Adm. John Nowell Jr. announced the service-wide plan in an administrative message on Sunday. Commanders are permitted to tailor their messages to their specific commands, but at minimum, they must have all Navy personnel, uniformed and civilian, participate in a “group re-administration and reaffirmation of the oath of office/oath of enlistment” and review “actions that betray the oaths.”

“As public servants, we took an oath to the Constitution and we will not tolerate those who participate in actions that go against the fundamental principles of the oath we share, particularly actions associated with extremist or dissident ideologies,” Nowell’s message reads. “Service members, Department of Defense civilians and all those who support our mission, are entitled to an environment free of discrimination, hate and harassment.”

The Navy move comes after President Joe Biden’s Secretary of Defense Lloyd Austin called on the entire Department of Defense to hold a stand-down on extremism over a 60-day period on Feb. 3. In the initial DoD announcement, Pentagon spokesman John Kirby said the exact details of the training during the stand-down were still being determined.

The Navy is the first branch to publicly announce its plan to fulfill the DoD-wide extremism stand down.

“As Sailors, we must strive to be inclusive, creating an environment where every individual understands that they are a valued member of the Navy team,” Nowell wrote. “This is an All Hands effort.”

All Navy commanders must report their stand-downs as complete by April 2.

The Navy has also provided commands with a link to discussion guides and slides on discussing extremism. The slides state sailors enjoy the right to freedom of speech and the right to peacefully assemble, “however these important rights are not unlimited in their protections.”

“Vandalizing government property and storming a police barrier is not an exercise of First Amendment rights,” a Navy discussion guide states. “Similarly, speech in the workplace that interferes with the mission, espouses extremist or discriminatory doctrine, or is disrespectful and harmful to colleagues, will have consequences.”

The call for a DoD-wide stand down on extremism comes after numerous current and former service members have been charged in connection with the Jan. 6 incident at the U.S. Capitol in Washington D.C., in which demonstrators entered the building, clashed with police inside and disrupted Congress. According to an analysis by NPR, 20 percent of those charged in connection with the Jan. 6 incident have ties to the U.S. military.

Kirby said Jan. 6 was a “wake up call” for the DoD and whether extremism exists in the military is no longer up for debate, “It’s really just about to what degree.”