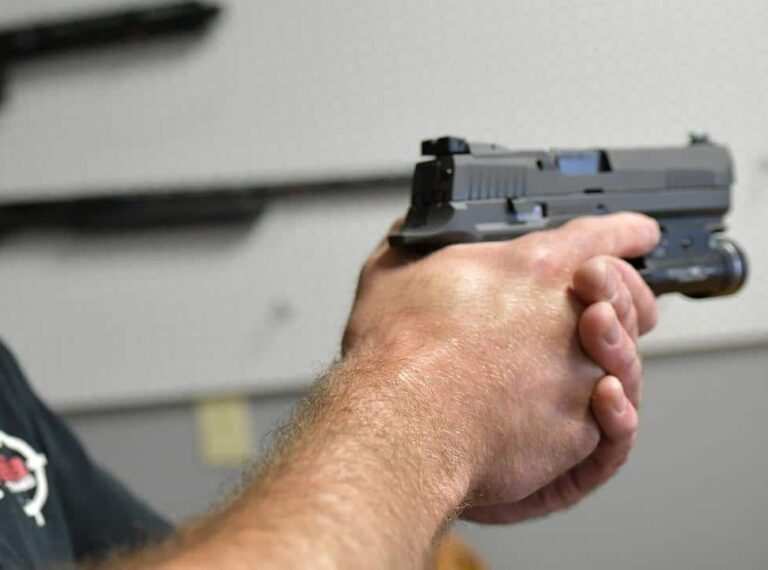 Gunmaker Sig Sauer is facing a new lawsuit from a U.S. federal agent who claims his holstered P320 pistol discharged without him pulling the trigger and struck him in his upper right hip.

According to a Thursday press release by Saltz Mongeluzzi & Bendesky P.C., former U.S. Marine and Immigration Customs and Enforcement (ICE) agent Keith Slatowski was preparing to discharge his service pistol at a government firing range on Sept. 21, 2020, without him touching or even pulling the trigger.

The accidental discharge resulted in “substantial injury, maceration of tissue, blood loss, and nerve damage” according to the press release. The lawsuit alleges Slatowski’s injuries are the result of “potentially deadly design defects.”

Bagnell Law, LLC, is also representing Slatowski in the case and attorney Jeffrey S. Bagnell several other people who have suffered injuries with Sig Sauer’s P320. Bagnell said, “There are hundreds of thousands of these guns in circulation now – in the holsters of police and in households of private citizens – and we believe, based on the disturbing number of incidents to date, that they present a serious safety risk to their owners and those around them.”

Slatowski’s attorneys said Slatowski’s weapon accidentally fired despite the Sig Sauer promotional material claiming the gun will not fire “unless you want it to.”

The lawsuit is particularly noteworthy as the Sig Sauer P320 is a design nearly identical to the M17 and M18 Modular Handgun System adopted by the U.S. Army in 2017.

“I’m shocked that a firearms manufacturer would design, build and sell a lethal weapon knowing it could fire without the most highly trained soldier, agent, or civilian ever touching the trigger,” Slatowski said. “I also cannot believe that the gun maker repeatedly has blamed the victims for their own negligence, as if me, the sheriff’s deputy in Virginia whose leg was shattered, the special forces operative in Canada, on and on, were all at fault, as if we intended to shoot ourselves. They don’t confront the fact their gun is prone to defective firing and somebody’s going to get killed unless they’re recalled and fixed.”

Sig Sauer spokesman Michael Marotte told Military.com the gun manufacturer is not prepared to comment on the new lawsuit.

Sig Sauer has previously seen lawsuits raising concerns with the P320. In March 2020, a judge allowed a lawsuit to proceed against Sig Sauer over similar P320 accidental discharge concerns and the company agreed to provide a free voluntary upgrade to anyone who purchased models of the firearm manufactured before Aug. 8, 2017.

Slatowski’s lawsuit alleges the P320 has had at least 28 accidental discharge incidents among law enforcement officers, 15 of which have resulted in injuries.

Video: SpaceX sticks landing of Starship prototype, but then it explodes